2017 Six Nations: The Best of Social Media from Round One 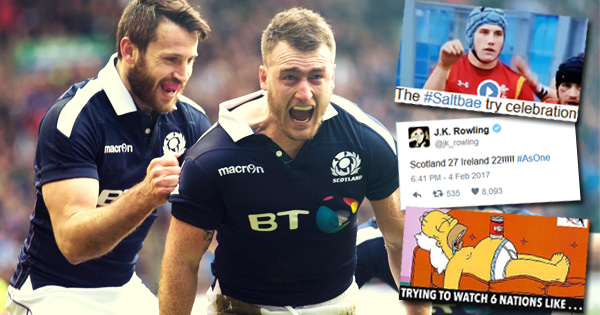 Round one of the 2017 Six Nations lived up to all expectations. It had everything from big upsets to stunning tries, funny celebrations… and even bonus points. However, it was Scotland’s heroic win against Ireland grabbed most of the headlines.

Highlights: Scotland vs Ireland | England vs France | Italy vs Wales

But what was social media’s take on the weekend’s action? Here’s a rundown.

Scotland recorded only their second opening round win since Italy joined the tournamnet in 2000, and didn’t they enjoy it…

Chuffed to bits to come away with the win. BT Murrayfield was rocking, great atmosphere. Thanks for your support. @Scotlandteam #OurDay

Got home, watched @Scotlandteam – absolutely rousing stuff from the men in Blue – made me smile so much! Passion, accuracy, desire, awesome! pic.twitter.com/CxkC7ZrS0b

Injured Billy Vunipola was supporting his side with pride

Just so you know #weartherose ????

The #Saltbae try celebration, brought to you by Wales vs Italy. pic.twitter.com/ZDPhogBL9D

And referee JP Doyle also fancied a try for himself.

Meanwhile over the other side of the fence.

FAN OF THE WEEK

Arsenal midfielder Arron Ramsey’s other half Colleen was clearly delighted with the win against Italy, but maybe not Chelsea.

Great birthday weekend and topped off with a brilliant start to the 6nations #WalesVSItaly #SixNationsRugby pic.twitter.com/8PeF2QWGMg

Let us know if there is anything else you spotted that should be added here!