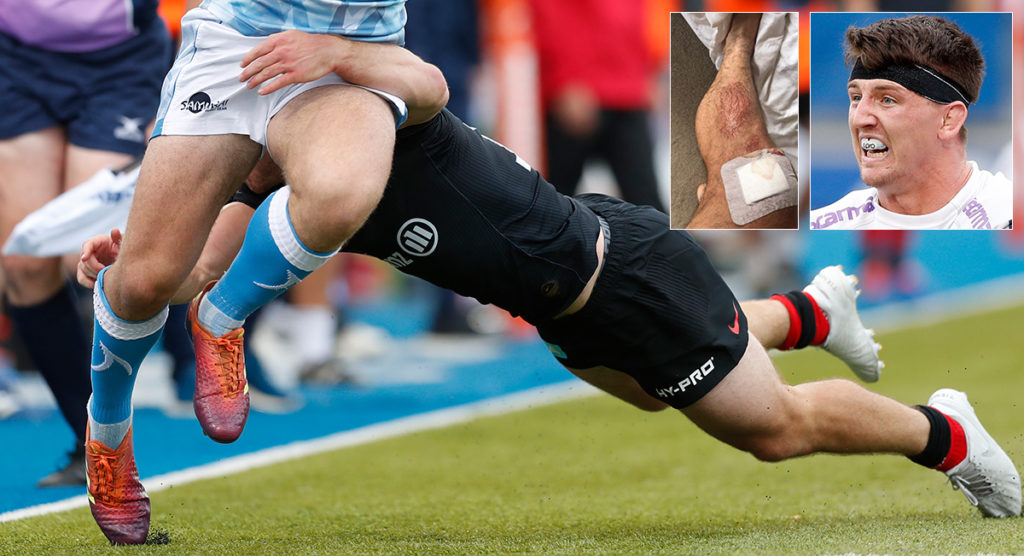 Sale Sharks may have come away with an impressive 36-17 victory over Saracens on Saturday, but that did not stop Allianz Park taking another victim.

Sale’s Ben Curry suffered grazes down his leg from the 4G pitch, something that a number of other players have experienced in the past when playing on the artificial pitches of Saracens and other clubs like the Glasgow Warriors.

Curry shared the photo on Twitter, also tagging the Rugby Players Association in the post, possibly in an attempt to raise more awareness of the injuries that are sustained on the surface.

Artificial pitches have a number of positives, particularly in facilitating a quicker and more attractive brand of rugby, but Curry is not the first player to share images of their legs or arms torn apart from the surface.

Northampton Saints’ Alex Mitchell shared equally unpleasant pictures last season after his side’s visit to Allianz Park, alongside the caption “Say no to these 4G pitches,” once again tagging the RPA in the post.

Mitchell’s teammate Fraser Dingwall also shared a photo of his foot in a protective boot after that match, suggesting injuries are not exclusively confined to grazes on the skin.

Curry’s brother Tom, on duty with England at the Rugby World Cup in Japan, did what all brothers would do, and made light of it.

While there is the risk of injuries to joints on 4G pitches, that is an inherent risk on any surface in rugby, although some players do feel at greater risk on the artificial surface.

However, a more pressing concern to players seems to be the gruesome burns from the pitches, something that players seem to be flagging to the RPA to do something about.

This was an impressive win for the Sharks in the Premiership Rugby Cup, although the players would probably rather avoid the battle scars.