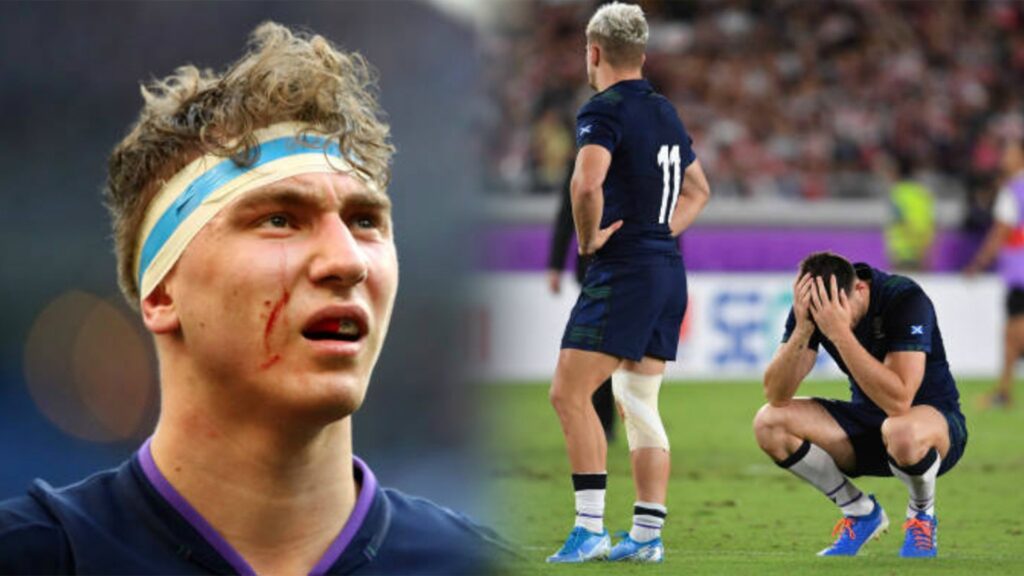 In the aftermath of Scotland’s group-stage exit at the Rugby World Cup, Gregor Townsend complimented his side’s efforts saying, “I believe we have the makings of a very good team who can compete with the best in the world.”

As it stands Scotland are nowhere near competing – with their tournament performance in Japan underpinning just how far off the standard they are after they were outplayed and outclassed by Ireland and Japan in the group stage.

Under Townsend’s stewardship, the Scots have won only 17 out of their 31 test matches – including defeats to Fiji and the USA.

The story has been the same for much of this decade with Scotland finishing in the Six Nations bottom three in 8 out of their last 10 attempts.

It has been the same headline for years, ‘Brave Scotland beaten’ … ‘Brave Scotland edged out’, a familiar line for fans that are no strangers to their national sides frequent shortcomings in recent years. 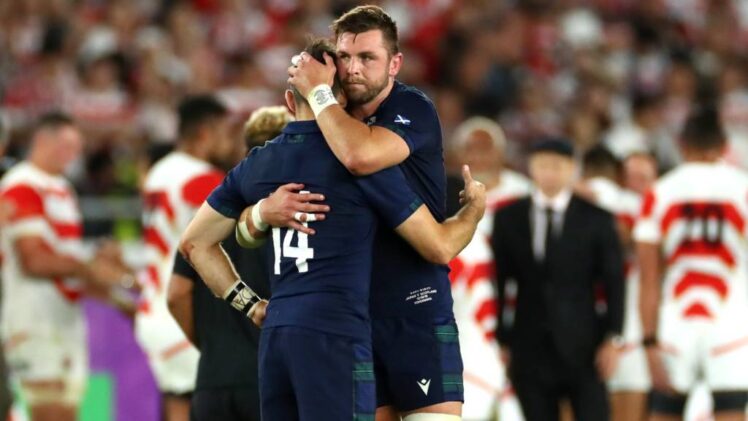 Scotland after their World Cup loss to Japan

Scotland needs to shake off the ‘brave’ tag and push on from their position in European rugby as plucky underdogs and adopt a winning mentality, that mentality begins in domestic rugby.

Glasgow Warriors won the Guinness Pro 12 in the 2014-2015 season and that has remained Scottish rugby’s only major trophy since the turn of the millennium.

Compare this to England, who’s recent World Cup squad comprised of 9 Saracens players. Saracens – who have become serial winners with 5 Premiership wins and 3 Champions Cup triumphs in this decade.

In Ireland, winning has also become a part of the fabric of the national side with 14 Leinster players representing their country in Japan this Autumn. Those Leinster players will have enjoyed domestic success with 4 league titles and 3 Champions Cup victories over the last ten years.

For these sides, winning has become a habit, a habit that Scottish players haven’t been able to pick up.

With 22 members of Scotland’s World Cup squad playing for Glasgow Warriors and Edinburgh, the national priority must be to bring more success to these clubs.

For these clubs to be successful, they will need to hold onto their best Scottish players. The likes of Finn Russell and Stuart Hogg have already moved south to play in England and France and Townsend will fear that more will follow.

As of October 2019, there were 36,207 people registered as rugby players in Scotland. This compared to Ireland’s 153,823 and Wales’s 79,800 – both nations with smaller populations than that of their Celtic cousin Scotland.

With this, it is clear to see there is a recruitment problem at the grassroots level of the Scottish game. This could be put down to the lack of success from the national team over the last twenty years, which has failed to galvanize the next generation of Scottish rugby talent.

There have been patches of success for this side. Most recently in 2018 – Scotland finished 3rd in the Six Nations with arguably their greatest performance of the last decade against England at Murrayfield.

Fly-half Finn Russell pulled the strings in a comprehensive 25-13 win over ‘the auld enemy’ with magnificent scores being finished by Huw Jones and Sean Maitland. This was the fast-paced attacking rugby that former Scotland fly-half Gregor Townsend had promised when he took over as head coach – and it looked like this could be the start of a new revival for Scotland.

Those hopes were tarnished a week later with defeat to Ireland in Dublin. This perhaps has been the most prominent theme for Scotland in recent years who have at times been formidable at Murrayfield – only to perform dreadfully away from home.

There have been wins against South Africa, Australia, England and Wales at Murrayfield in some big one-off wins. They even came close to beating the All Blacks in 2017 – only a try-saving Beaudent Barrett tackle on Stuart Hogg snatching away a famous victory.

Away form is and has been a huge problem for the Scots. In 25 away games over the last decade in the 6 Nations, they have come out as losers on 20 of those occasions – a woeful record that has been a decisive statistic in Scotland’s failings down the years.

If the recent World Cup in Japan taught us anything, it’s that defence wins trophies – with the most successful sides in recent years employing the best defensive coaches in world rugby.

In the last ten years, Scotland have conceded virtually the same amount of points as they have scored with 2505 for to 2485 against. The man in charge of Scotlands defence since 2012, Matt Taylor, has failed to create a world-class defensive side.

Wales’s revival in 2008 coincided with the arrival of defence coach Shaun Edwards who revolutionized Wales’s game off the ball. Perhaps Scotland have missed a trick in not appointing the 53-year-old British and Irish Lions coach who has now gone on to join the French set up after over ten successful years with Wales.

In the current national side, two players stand out from the rest. Stuart Hogg and Finn Russell. Hogg has consistently been Scotland’s best back in recent years and has been named 6 Nations Player of the Tournament twice.

Finn Russell can win a game on his own and embodies the style of attacking rugby that Townsend has wanted to implement. At his best, he is undoubtedly world-class and his performance in his sides astonishing 38-38 draw at Twickenham in 2019 showcased his ability to turn a game on its head when it matters.

Unfortunately, players of this calibre have been few and far between for Scotland with only 8 Scots being selected to tour with the British and Irish Lions over the two tours in this decade.

Richie Gray’s appearance off the bench in the Lions third test win over Australia in 2013 is the only appearance of a Scot in a Lions test since 2009. Perhaps that is the point that illustrates best how far Scotland have been behind the other home nations when it comes to creating world-class players.

With Gregor Townsend vowing to stay on as head coach and a year remaining on his contract – it looks likely that he will be the man to lead them into the 2020 Six Nations. So no change there then.

It’s been a decade to forget for Scotland fans and it is clear to see that there will be no quick fix if they are to make it back to the top.

Posted By: Ted Parker
Thanks
Sorry there has been an error
Login or Register to comment