A young Vincent Clerc smashed by Jonah Lomu in 2003 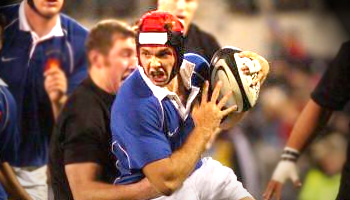 Long before Vincent Clerc was the star French winger that he is today, he was a small, rather funny looking quick guy with a goofy scrum cap. That’s how he appeared to some anyway.

Today he’s a try scoring machine with all the finesse and flair of French wingers of the past. Back in 2003, in only his second test for his country against the mighty All Blacks, it was a baptism of fire as he was up against the most feared runner in the game. That’s right, Jonah Lomu.

A bit of a miss match to say the least.

It wasn’t on defence that 5ft10 Clerc struggled on this occasion though, it was with ball in hand. Clerc made the silly mistake of not kicking, or passing, straight away.

Lomu was never known for his huge defensive capabilities, but when it’s a huge guy up against a small man, there’s only going to be one result.