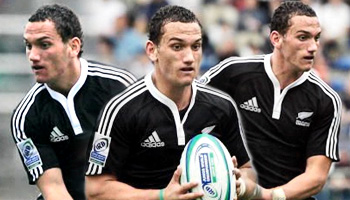 Young Kiwi flyhalf Aaron Cruden is a huge talent with an inspirational story. The Manawatu player was diagnosed with Testicular Cancer last year, but has since come back to lead his countrys Under 20 side to victory at the Junior World Cup.

Cruden not only captained the side, but was later named IRB Junior Player of the Year 2009 for his outstanding form throughout the tournament. He has since captained Manawatu in the Air New Zealand Cup, at the age of 20.

Last season Cruden appeared for the Turbos, but in August his dreams were seemingly shattered as he was diagnosed with cancer, having a testicle removed then undergoing an intensive course of chemotherapy.

Cruden battled back, and in November, he was given the all clear. The first thing he did to celebrate was pick up a rugby ball and head to a field for a kick around.

Since making his return, the plaudits have been plentiful, as hes already been recognised as a possible successor to the Dan Carter throne. NZ Under-20 and Manawatu coach Dave Rennie rates him extremely highly.

“He was the best first-five in Manawatu last year as well but he had only just turned 19 so we were pretty keen to give him time off the bench in the first part of the competition.

“He started in the Shield challenge against Auckland but then sickness ruled him out, otherwise he would have played a little bit more at this level already. He’s very confident and very competent and he’s already had three years of senior club rugby and he’s probably been the best player in all of those three years.”

“There was a lot of hype around his performances and it’s a pretty good story. A lot of people wanted to talk about the fact he’d come back from cancer.

“He was pretty quick to put it to bed. It was a fantastic achievement but he’s pretty keen to prove himself at the next level and if he wants to go higher in the game he needs to perform at provincial level, Rennie said.

Hes already impressed in this seasons tournament, scoring a few tries and sparking the Manawatu backline, showing that hes now put the setback behind him and grown as a player, but also as an individual.

“It hasn’t so much changed my outlook on life,” Cruden said. “But it has on challenges that you face throughout life. A lot of people may have looked at it as a negative. But I believe it will make me stronger as a person.”

Remember the name Aaron Cruden. You’re sure to see a whole lot more of him in the future.