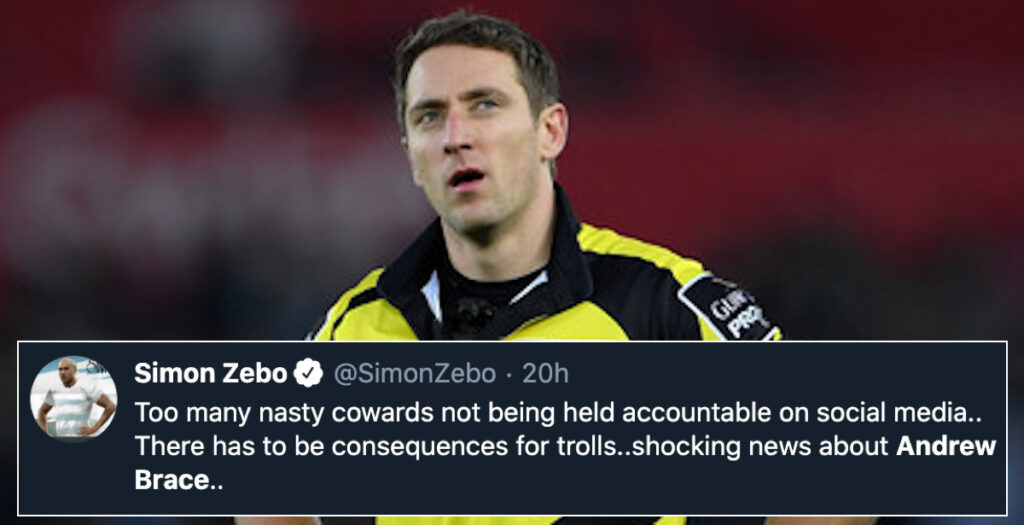 Players and fans have jumped to support referee Andrew Brace after he was pulled from a Champions Cup game between Exeter and Toulouse following intense online abuse.

Brace received a barrage of criticism for his performance in the Autumn Nations Cup final last weekend between England and France which saw  nasty comments appear on an obituary to Brace’s late Father on Twitter.

Rather than travelling to France, Brace has made a direct swap with Scottish referee Mike Adamson and he will now take charge of Wasps’s home game against Montpellier next Friday.

The decision was made as much of the abuse came from French accounts on Twitter and a statement from EPCR read: “Due to the personal nature of some of the criticism levelled at Andrew Brace following last weekend’s Autumn Nations Cup match between England and France, it was prudent on this occasion to make the appointment changes.

“EPCR and the selection committee regard Andrew Brace as a highly-talented match official, and with his welfare and development as a referee at the forefront, this course of action was deemed to be appropriate in the circumstances.”

Many fans and players have now jumped to the support of Brace following the decision from EPCR.

Too many nasty cowards not being held accountable on social media..
There has to be consequences for trolls..shocking news about Andrew Brace..

Andrew Brace wasn’t the only referee, still no one ever deserves this …ever #trolls https://t.co/dfzfqtYB2E

The treatment of Andrew Brace on here is disgusting. Twitter needs to start holding people to account or the platform will die, and rightly so.

Andrew Brace had a bad day at Twickenham last weekend but the fact that the level of abuse levelled at him means they’ve had to switch his Champions Cup games to avoid him going to France to protect his own safety is shocking. Apparently rugby is nicer than football… 🤔

The abuse to Andrew brace is unacceptable. Yes he had a bad day at the office but as every sportsman knows, don’t leave it to the refs to decide the outcome.

Twitter as a forum is great but also incredibly devoid of debate, nuance and understanding.

Anyone hurling personal abuse at Andrew Brace has no place in our game. Critisise the decision(s) at the time, as I did tbh, then that’s it.

It is difficult to truly understand why people feel it is necessary or kind to personally abuse people in the spotlight. Get a life and #BeKind

Andrew Brace is one of the most outstanding young referees in these islands and as decent a man as you’d ever wish to meet.

His treatment has been utterly abominable.

Sad to hear about Andrew Brace, you can disagree with his on field decisions all you like, but to abuse him on social media, not supposed to be what the game is about…

Good luck on your return Andrew Brace, all I can say is I thought he had a very good game.

I’ve just been reading about Andrew Brace being stood down for his next game because he posted an Obituary to his Father on line. Apparently he received the most appalling abuse. I know his last game was controversial but really, some people 🙄

I don’t think Andrew Brace is a very good referee but the personal abuse he’s received is absolutely appalling.

Sad that it has come to this. I’m so disgusted by people’s behaviour on social media once again. Andrew Brace is a top referee and a fantastic role model to all, and does not deserve this backlash. People need to learn to do better and be less toxic!! 😔 https://t.co/FvGSCPEWa7

@WorldRugby This account is impersonating you and has been set up to abuse Andrew Brace. Please report it and get it taken down. https://t.co/fib8WdzOGV

@SimonZebo this account is literally set up to troll Andrew brace. Disgraceful

What has happened to Andrew Brace this week is nothing but shameful. Godspeed mate and be well.

This is absolutely appalling –