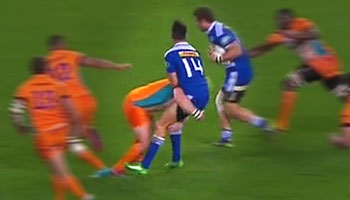 Cheetahs hooker Adrian Strauss will miss the first three Springbok matches of the season after he was suspended for three weeks for a lifting tackle against the Stormers on Saturday night. Strauss pleaded guilty to the charge at the disciplinary hearing.

Strauss will miss the Boks’ clash with the World XV as well as the Wales series that comprises of two home Tests in June. He’ll be available again for the Scotland Test on June 28.

He was hit with the three-week ban after pleading guilty to a charge of lifting Stormers winger Kobus van Wyk off the ground and failing to bring him back down safely.

It adds to the headaches for Springbok coach Heyneke Meyer, who has already had to contend with the loss of captain Jean De Villiers to injury, and today the news that Frans Steyn might also be out.

They’ve called in little known Bulls hooker Callie Visagie as backup to Bismarck Du Plessis, as other players in the position are either injured or unavaible due to club commitments.

“Of the players who have been part of Springbok squads in the last two seasons, Scarra Ntubeni, Chiliboy Ralepelle and Tiaan Liebenberg are injured, while Schalk Brits and Craig Burden are playing in club finals this weekend and aren’t available for the camp,” said Meyer.

Strauss was yellow carded by referee Stuart Berry at the time, but a SANZAR judiciary found that the incident had an entry point in the low end range, which starts at a four week suspension. “I then added two weeks as a deterrent to send a further message that this type of tackle cannot be tolerated in the game due to the risk it poses to player,” said Duty Judicial Officer Adam Casseldon.

“Factors considered in mitigation included the player’s excellent record extending over 33 test matches for South Africa and over 100 Super Rugby matches, his good character and the player’s early admission of guilt for the tackle and remorse shown for the incident.”

Based on that, Casseldon reduced the six week suspension for Strauss to three weeks.

What are your thoughts on the decision, and the ‘tip-tackle’ law?