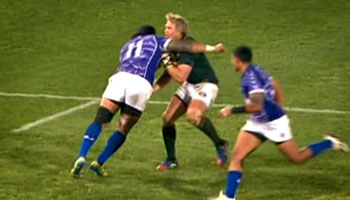 Samoan winger Alesana Tuilagi has been suspended for two weeks for the dangerous high tackle that he made on Springbok Jean de Villiers in the final of the Quad Series in Pretoria on Saturday. The Springboks won the game 56-23.

As always when these two sides meet, the game was physically brutal as both teams smashed one another at every opportunity throught the eighty minutes at Loftus Versveld.

At times things overstepped the mark though, as a few incidents were referred to the TMO for foul play, and shortly after one of the worst – a testicle grab by James So’oialo – Tuilagi flew into De Villiers with a stiffarm tackle that made contact with the Bok centres face.

De Villiers showed his class as he handled things well, and if anything he did Tuilagi a favour by hopping back up and not feigning injury. The officials had their own view though.

Tuilagi, who earlier made a few legal big hits, was shown a straight red card and later cited.

Today a disciplinary hearing found him guilty of foul play, and suspended him for two weeks. The NTT Shining Arcs (Japan) player is free to play again on 15 July.

Below is a look at the tackle, and we’ll have other incidents and match highlights soon.

Do you agree with the straight red card decision?