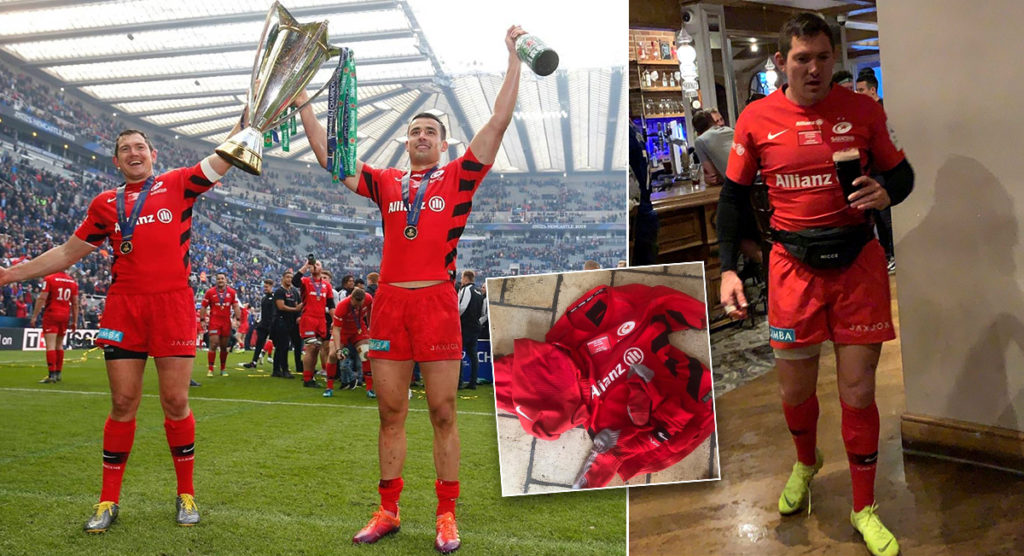 In one of the stranger stories in the rugby world this week, Saracens fullback Alex Goode has brought his three-day bender to an end, after winning the Heineken Champions Cup in Newcastle on Saturday.

The 30-year-old’s exploits have been documented on his teammates’ social media accounts, as the newly crowned European Player of the Year kept his kit on for three days while celebrating. This seemed to include keeping his boots on and his gum shield tucked into his sock.

Why get changed when you have won the European cup for a 3rd time and awarded European player of the year! @Saracens @Alex_goode0 pic.twitter.com/5T9FJc52Xz

It was a particularly special weekend for Goode, as Saracens were crowned Champions Cup winners after their brutal encounter with Leinster. Capping it off with his individual accolade was obviously a good enough reason to celebrate the way he did.

He even stayed in kit and boots on the plane home.

Borrowed the pic, but he’s still in his kit on the plane home! Plus boots! pic.twitter.com/4yXvH5M8GI

However, the 21-cap England international shared a photo today on social media of his kit on the floor, with the caption “over and out”, as he brought down the curtains on his festivities.

With Saracens heading to Worcester this weekend in the final round of the Premiership, it seems unlikely that Goode will be playing, as he may need a few days to recover not only from the match, but what ensued afterwards.