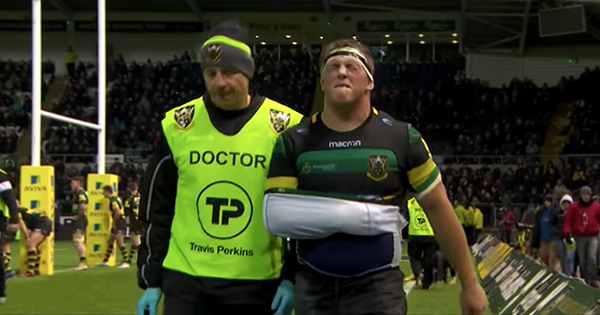 Northampton Saints prop Alex Waller has undergone surgery after breaking his forearm in the dying minutes of Friday’s night’s clash with Newcastle Falcons at Franklin’s Gardens. Waller played on, contributing to the defensive effort.

With just over four minutes left in the match, Newcastle were hot on attack with Tongan Nili Latu storming forward. Unfortunately for Waller his forearm appeared to make contact with Latu’s very prominent head, cracking his forearm in the process.

Waller got up slowly, but rejoined the defensive line as play continued for another two minutes before it was finally brought to a halt with the attempted Falcons try, which included the injured front rower putting his body on the line right in front of the would be try scorer.

The 27-year-old was eventually taken from the pitch, and after undergoing surgery for the broken forearm, will require eight to ten weeks of rehabilitation.

“His run of consecutive starts in the Aviva Premiership – stretching all the way back to May 2011 – has been remarkable. But he’s a resilient player and will be working hard to come back stronger for an important period in the new year.”

This attempted try was ruled held up but the Falcons did eventually cross for a try, drawing things at 22-22 before the conversion gave them a 24-22 away victory.

You can see when the injury occurs below, and how he stayed on, clearly in severe pain.