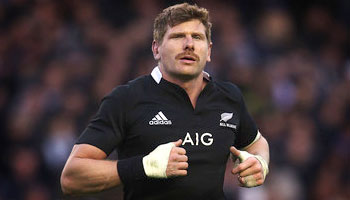 The All Blacks won comfortably 51-22 against a valiant Scotland side at Murrayfield on Sunday, but could be without flanker Adam Thomson for the rest of the tour after he was yellow carded for placing his boot on the head of Alasdair Strokosch.

The incident was brought to the attention of referee Jerome Garces by touch judge Simon McDowell after Thomson has gone in looking for the ball, using his foot as a feleer.

Thomson was sent from the field for just ten minutes, while some, after seeing the television replay, felt that a red card would have been the more appropriate punishment.

Thomson has since been cited, and will face a disciplinary hearing on Wednesday.

Strokosch himself, who was at the bottom of the ruck, said that he felt there was no malice in it.

“I don’t think there was any malicious intent by Adam Thomson, there isn’t even a mark and hopefully his yellow will be the end of it. I barely felt it.

“If it had been intentional he’d have done a lot more damage. It didn’t feel like a stamp,” he said.

If Thomson gets a ban, which could be anything from three to eight weeks, that would rule him out of the rest of the tour, missing New Zealand’s matches against Italy, Wales, and England.

“Someone will take a look at it and decide if it was malicious or reckless. I suggest it was just reckless,” said All Black coach Steve Hansen after the game.

“I didn’t see it at the time but I saw the replay. It looked like Adam was frustrated – he placed his boot on the guy’s head, but he didn’t stomp him,” Hansen added.

“@Rugbydump I believe it was a mistake, hopefully he’s let off. I was lying all over the ball”

Do you think a Yellow card was sufficient, or should he receive a lengthy ban?