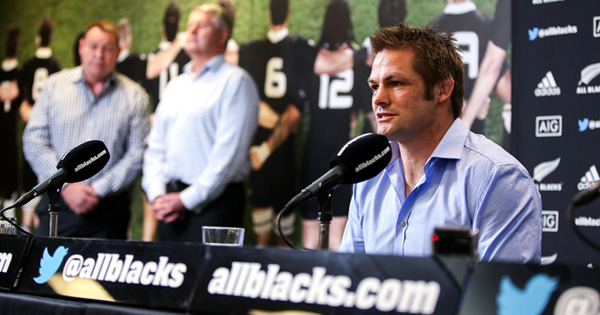 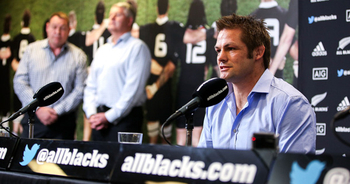 Double World Cup winning captain Richie McCaw has officially confirmed that he has now retired from professional rugby. The most capped rugby player of all time explained his reasons at an emotional press conference in Wellington on Thursday.

McCaw started his incredible career in Dublin in 2001, then aged just 20, and picked up the Man of the Match award in that match, against Ireland.

He went on to lift the Webb Ellis Cup twice, as well as receiving countless other accolades.

“I’m hanging up my boots having accomplished everything I could have ever dreamed about in the game. Knowing that I was able to end my career by helping the All Blacks win the Rugby World Cup Final is a hugely satisfying feeling,” he said.

“Professional rugby has been great to me. It’s allowed me to pursue my passion, to be involved with great people, hopefully make those close to me proud and travel the world.  I’ve had some wonderful experiences for which I’m very grateful and I’d like to thank New Zealand Rugby for the opportunities they have given me.”

McCaw said he would now be concentrating on his business, personal sponsorship and charity interests. “I’m now really excited about starting the next chapter of my life. I’m looking forward to the future and what it may hold.”

All Blacks Head Coach Steve Hansen said of McCaw:  “On behalf of the All Blacks, we want to congratulate Richie on everything he has achieved in his career.  All this success couldn’t have happened to a better bloke and we wish him all the very best for the future.

“In my opinion, he will go down not only as the greatest All Black of all time, but the greatest captain we have ever had and possibly the greatest player to have ever played the game in the modern era,” the RWC winning coach added.

Here is a quick recap of the press conference, and below that you can view a full version that includes a moment of silence and acknowledgement of the tragic passing of his former teammate, Jonah Lomu.