All Blacks retain Bledisloe Cup with Wellington win over Wallabies 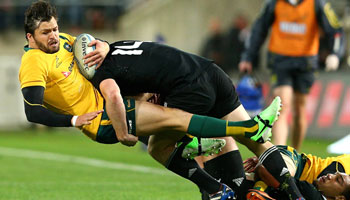 Ben Smith scored two tries as he and the All Blacks continued their fine form, beating the Wallabies 27-16 to retain the Bledisloe Cup in Wellington. Debutant flyhalf Tom Taylor kicked 14 points, while Tony Woodcock picked up his 100th Test cap.

The Wallabies started off well and it looked like this occasion was going to be entirely different to what happened in Sydney a week ago, when they were thumped 47-29.

A 6-0 lead in the first half from two Christian Lealiifano penalties gave them the edge before the All Blacks responded with two very well taken tries by Ben Smith, after some wonderful handling.

With a 15-6 halftime lead, the All Blacks didn’t look too troubled in the second half and as Taylor got into the swing of things with the boot, even an intercept try by Israel Folau, who stepped namesake Israel Dagg beautifully, proved nothing more than a consolation.

The Wallabies haven’t held the Bledisloe Cup since 2002 so will have to wait another year, although they will be able to have another crack at New Zealand when the two sides meet again in October.

Their next match is against South Africa in Brisbane on September 7th, while New Zealand host Argentina in Hamilton on the same day. The Springboks take on Argentina in Mendoza tonight.

We’d love to hear your thoughts on the match. Below are some discussion topics