All Blacks team to face Wallabies in Rugby Championship opener 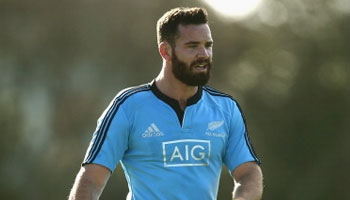 Ryan Crotty has been named on the bench for the All Blacks’ opening Rugby Championship Test in Sydney on Saturday. The Wallabies meanwhile have picked five new players, and made a change up front as Matt Toomua moves to flyhalf.

Crotty is the only new cap in a side that boasts over 870 Test appearances. Richie McCaw returns to the side to captain them in his 117th Test match.

With Dan Carter out injured, Aaron Cruden will take up the playmaker role in tandem with scrumhalf Aaron Smith. In the midfield Conrad Smith and Ma’a Nonu resume their partnership, while out wide there is talent to burn in Julian Savea and Ben Smith, with Israel Dagg at fullback.

Ryan Crotty makes his debut on the bench and can cover both 12 and 13.

“There’s huge excitement in the group as the Bledisloe Cup is a very important trophy for the All Blacks,” said New Zealand head coach Steve Hansen.

“With the changing of the guard in the Australian coaching group, it adds a little bit of the unexpected to the challenge. Therefore, we need to ready for anything they chuck at us.

The Wallabies, under new coach Ewen McKenzie, have brought in five uncapped players, and moved the impressive Matt Toomua to number ten. Brumbies teammates Scott Sio, Scott Fardy, Nic White and Tevita Kuridrani will make their debuts off the bench.

With Toomua at ten, the versatile James O’Connor shifts to the wing, while Ben Mowen moves to number eight. Quade Cooper makes a return, starting on the bench.

“When we picked the team we didn’t spend one minute looking at how many Test caps a player had or the number of debutants, said McKenzie.

“It was picked on performance over a sustained period of time and on how we want to play the game. The fact that five guys haven’t played a Test before isn’t a concern.

“Everyone has to start from somewhere and we definitely haven’t picked them on one game. Rather, they are starting their Test careers off the back of consistently strong performances at a provincial level.

“The reality is that whether it’s in Super Rugby or the Test arena, all our guys have a lot of familiarity with who we are playing against. I see that as a positive as we aren’t playing anyone we don’t already know a lot about,” he added.