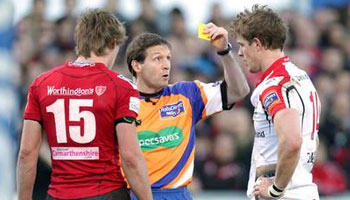 Ulster have reached the RaboDirect Pro12 final, beating Scarlets 28-17 at Ravenhill last night. It was an eventful, amusing game for winger Andrew Trimble, who was yellow carded for fighting in the first half, and later provided some laughs with a comical trip.

After some early penalty kick exchanges, the first try came on 25 minutes as British & Irish Lions tourists Tommy Bowe and George North went one on one, with the senior Bowe getting the better of the young star, rounding him for a well taken try.

Both sides were down to 14 men following a scuffle between backs Liam Williams and Andrew Trimble, which seemed to kick off after a push and shove at the bottom of ruck.

Robbie Diack later crossed for a try and at halftime the hosts led 18-3, before Tom Court crossed in the second. Scarlets’ Gareth Davies scored what was probably the try of the match as he weaved his way past defenders, and later Sione Timani also scored, but it wasn’t enough for the visitors.

Man of the Match Rory Best spoke of how determined Ulster are to win a trophy this season.

“Ultimately this is where we want to be. We want to win silverware this year and this is our last crack at it now. This team, we felt at the start of the season, was good enough to win something — we wanted to win everything, but this is our thing now and we’re delighted to be in the final.”

The Pro12 Final takes place on May 25th in Dublin, where Ulster will face either Leinster or Glasgow.

Note: All clips are official Pro12 highlights, so there is no commentary unfortunately