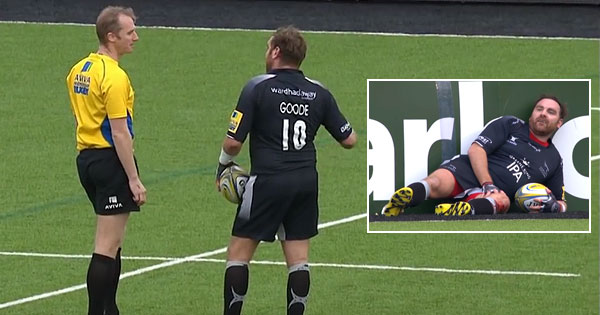 Former England number ten Andy Goode has become even more of a cult hero of late, after making a comeback to professional rugby aged 35, and taking to the field looking more like a forward than a back. His boot has done the talking though, with a string of top performances.

Here is a look at Newcastle Falcon’s 26-25 victory over Northampton Saints, with Goode and referee Wayne Barnes taking part in a number of very funny exchanges.

After the game Goode tweeted about Barnes and what a top man he is. You can also see a few other funny tweets below that, telling the story somewhat.

I wish every referee let you converse with them & had a sense of humour like Barnsey! Top ref, good bloke too! https://t.co/yeFt9JCf5V

The body feels fresh after 80 minutes yesterday! Naaaaaaat! Might have to have an afternoon Corona to ease the aches! #professionalrecovery