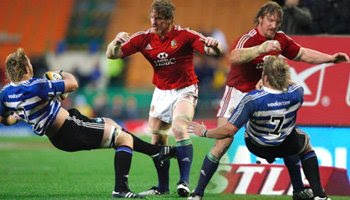 Cardiff Blues eighthman Andy Powell put in a solid performance on Saturday against Western Province as he looks to cement his place in the Test side by ousting the number one contender Jamie Heaslip.

While hes only had two appearances on tour, this past weekend he found glimpses of form, despite it being revealed that hes been playing through the pain barrier with a broken bone in his hand.

“I have a bit of a fracture there and it is a bit painful but these things happen in professional sport,” said Powell, who needs to wear a protective bandage to play.

“I have been able to get through it with painkillers. I have had to let it heal and I stayed a bit out of contact last week. Training is quite physical but that is part of the tour.”

Physical was the name of the game at Newlands in the 71th minute as he put in this monstrous hit on opposition loose forward Duane Vermeulen. The ref and assistant ref viewed it as illegal though, so a penalty was awarded.

“I have looked back at the video and I feel I put a full arm around him so it was a full contact,” he added.

“But these referees make their decisions and their word goes.”

Vermeulen is a huge unit himself, who doesnt often get knocked about, so this collision was immense. Come Test time, Powell may be up against another monster of a player in Sprinbok number eight Pierre Spies.

When asked how hell deal with him, the straight talking Powell has no hesitation in answering with a big smile on his face.

“That is an easy answer. Smash him mate.”

If the series between the Springboks and the British and Irish Lions is supposed to be the pinnacle of world rugby, the game is in serious trouble.

Accusations of foul play levelled against Hogg and Itoje

Accusations of foul play have been levelled against British & Irish Lions players Stuart Hogg and Maro Itoje in the aftermath of a fiery second Test in Cape Town.

Warren Gatland now occupies the territory he was in eight years ago when the Lions followed first Test victory with a second Test defeat.