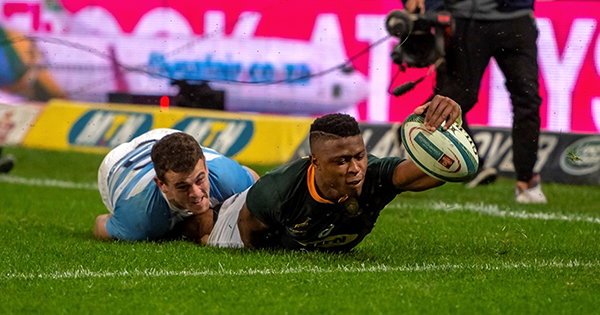 The Springboks got their 2018 Rugby Championship campaign off to a positive start, picking up a six tries to three bonus point win over Argentina in Durban on Saturday. The wingers scored two tries apiece, but one could easily have had a hat-trick.

Despite the solid 34-21 win, coach Rassie Erasmus was not altogether thrilled.

“The only positive was the first 30 minutes in the second half; it was the only decent rugby we played,” the former Springbok flanker said.

“I was expecting that we wouldn’t produce a completely fluent display, but the first half was worse than I thought. Thankfully Siya (Kolisi) and the boys picked it up after the break.”

Star winger Aphiwe Dyantyi picked up two tries, but could easily have had a third, if it were not for gifting right winger Makozole Mapimpi a try in the 52nd minute.

“I felt he was in a better position to score, so I gave him the ball to score,” he said.

Dyantyi picked up Man of the Match, and when asked whether it was a dream season for him, he humbly stated that when they beat New Zealand, that will then be a dream season.

Flyhalf Handre Pollard missed a number of kicks at goal, but it was the dominant forwards that laid the platform for the tries, impressing Argentina coach Mario Ledesma, who called them “the most physical team in the world by far”.

“They kept playing direct physical footie and it’s like a dam; if you keep hammering, hammering eventually the wall will break,” he said. And when asked if it was possible to stop the Springbok pack, he said: “Maybe if they get sick or something.”