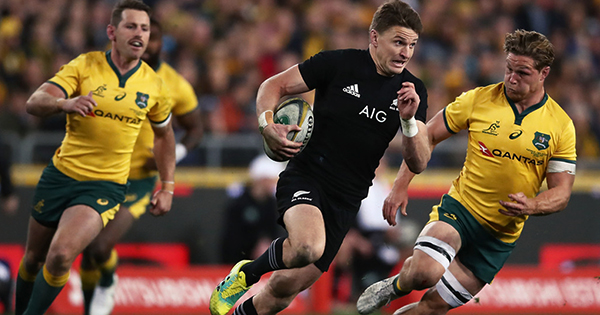 The All Blacks kicked off the 2018 Rugby Championship and Bledisloe Cup with a 38-13 bonus point win over the Wallabies in Sydney. The first half was a tight affair, as the Wallabies led for large parts before the visitors came back to score five tries to one in the second half.

New Zealand winger Waisake Naholo scored twice late in the game as things opened up and the Wallabies tried to pull things back, after sniffing a chance with a debutant Jack Maddocks try.

Earlier, potential disaster struck as Israel Folau limped off after it looked like he twisted his ankle.

Both sides head to Auckland next week to do it all again, in the daunting arena of Eden Park, where the Wallabies will be hoping to limit the error count, particularly at lineout time.

“We’ve got to look after our own ball. The Kiwis made us pay. Set piece was dissapointing,” said skipper Michael Hooper. “We want to play a nice expansive game of rugby but to win these games you’ve got to keep the pressure on.”

The All Blacks win was their seventh in a row away from home in the Rugby Championship, pleasing captain Kieran Read, who was all class as he praised the Wallabies for a tough match.

“Both sides played some really good footy. Looked after the pill. Bloody tough Test match. Credit to the Wallabies the way they came out. We had to fight really hard,” he said post match.

“It came down to a few moments, and we got the ascendancy in that second half.

“We knew the Aussies had a pretty good series against Ireland up front, so we wanted to put a line in the sand there.”