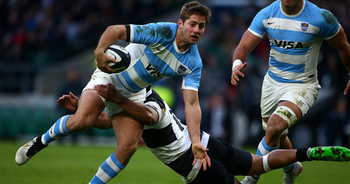 Argentina scored seven tries to beat an ambitious Barbarians team 49-31 at Twickenham. The game was played in the spirit of Barbarians rugby, with both teams flinging the ball around when possible, resulting in some sensational play as Los Pumas in particular impressed.

Just a few weeks after playing in the Rugby World Cup’s third place playoff, Argentina were back at Twickenham to take on the Barbarians, who themselves featured a number of RWC stars.

Early on it was clear that both sides were there to play, and while the BaaBaas scored first, it was the Pumas who played some thrilling rugby, often picking up the scraps to score brilliantly.

The Argentina brand of rugby will be on display in Super Rugby early next year, when a representative team will join the expanded tournament, and be made up predominantly of those on show against the Barbarians.

Rugby World Cup 2015 top points scorer Nicolas Sanchez ran the show for Argentina as they attacked from all parts, throwing the ball around to set the tone and please the crowd on hand.

giant Fijian wing Nemani Nadolo paid respect to Jonah Lomu by blanking out the number 11 on his back, and fittingly scoring a barnstorming try of his own, bouncing off defenders in true Lomu fashion. The late Lomu, who tragically passed away earlier in the week, played for the Barbarians on four occasions.

Bakkies Botha and Victor Matfield were reunited, as Botha came off the bench to play his final game of competitive rugby. He was given the honour of converting his skippers try, and despite channeling both Dan Biggar and Jonny Wilkinson, wasn’t able to get close.

It was a great ending to a fantastic occasion, as the Barbarian values were upheld, and Argentina made another statement to world rugby with an impressive performance.