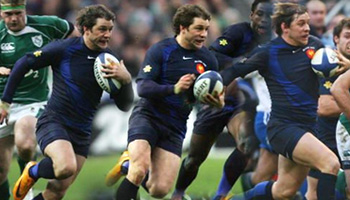 After a weekend in which we saw the French running riot against the Irish in the Six Nations, one player who really deserves a mention is the enigmatic Cedric Heymans.

Heymans was involved if most of the tries, and certainly played a huge role in Vincent Clerc achieving a first half hatrick.

An exciting runner who looks extremely dangerous when joining the line from fullback or when getting open space as a wing, Cedric Heymans also adds an excellent kicking game to his repertoire and is fast cementing his place as one of the French stars of the season.

I received a link to this excellent video from a guy named Camilo Gonzlez, who himself has put together a really good tribute to a great player who has scored some amazing tries of late for both Toulouse and his country France.