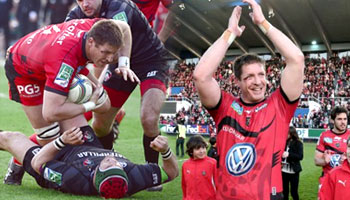 Leicester Tigers director of rugby Richard Cockerill has criticised Heineken Cup organisors for the lack of punishment for Toulon lock Bakkies Botha after Marcos Ayerze broke his collarbone attempting to tackle him on Sunday.

Cockerill feels that Botha should have been charged with ‘excessive use of the knee’ after he stormed towards the tryline at the Stade Felix Mayol in the Tigers’ 21-15 Quarter Final loss.

The former England hooker, no saint himself, was disgusted when hearing that Botha was not cited by ERC, and went on to accuse them of being out of touch with the modern game.

“Marcos has broken his collarbone in two. He will have surgery to have it plated and repaired, and he will be out for three months,” explained an incensed Cockerill.

“I have been told that there will be no citing of the incident. The citing officer put it forward as a citable offence but the gatekeeper from ERC’s disciplinary section has decided that it is not worthy of a citing. From the footage we have seen, we felt that it was an illegal act of jumping into a tackle.

“It caused a lot of damage to the player and I am very disappointed in the attitude that ERC have come back to us with. And I am bitterly disappointed with the inconsistency at disciplinary level within ERC yet again. They have failed to deal with what, in my opinion, is an act of foul play.

“I am pretty sure it is against the laws of the game to hurdle into a player – and that has caused damage to our player who will now miss the rest of the season.”

Argentine Ayerza said he was in a lot of pain before the operation, which will involve plates and screws. He said that he was told by club doctors that he’ll be out of rugby for about nine weeks.

“For me, that is a disgraceful decision to not, at least, have a hearing to look at all of the facts,” continued Cockerill. “To lose one of the best loosehead props in the world in that fashion is disappointing. It leaves a sour taste in the mouth.

“The rule-makers are so fussy on so many things but, when something like this happens, the disciplinary panels and officers decide there is no case to answer.”

Some felt that it was actually Botha who was unlucky in this instance, as the try wasn’t awarded. View the footage below and you can decide for yourself if there was a jump into the tackle or not.