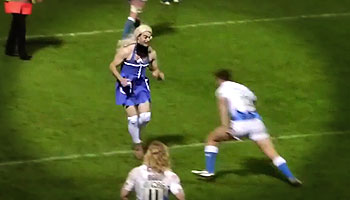 Bath were beaten 16-9 by Sale Sharks on the weekend following a late try that ended their three-match losing streak. The moment everyone has been talking about though was this tackle from a grumpy looking Olly Barkley, on a pitch invader.

Bath needed a win to increase their chances of Heineken Cup inclusion, but it was the home side that snatched the win in front of the Edgely Park faithful.

Barkley kicked three penalties for Bath but by the time a tranny pitch invader entered his vicinity, he’d had enough of what was a rather miserable night for the visitors, and took his frustrations out on the young man, who was out on a stag do.

Barkley dumped the guy to the turf, which was picked up by a fan in the stands, and wasn’t shown on tv. Surprised at all the attention the tackle got, Barkley later shared his thoughts on Twitter.

Judging by the reaction 2 tackling a drunk girl on Friday night, I may have to consider having it on my epitaph. My Grandad would b so proud

In other Bath news, prop Duncan Bell, who has played more than 200 matches for the club, has annonced that he will be retiring from the game at the end of the season.

“I’d like to thank all the players, coaches and staff I’ve worked with and the fans who supported me throughout my career,” said Bell, now aged 37.

“It’s been a difficult decision, but I’m looking forward to new challenges.”

Credit to the great work from the guy who filmed this, Mr SuperTighthead