Bay of Plenty's length of the field try against Wellington 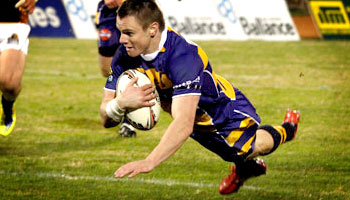 Bay of Plenty gave Wellington a good hiding in the ITM Cup on Sunday as they stayed top of the table with their 32-0 in Mount Maunganui. With a minute left in play, the fans got to see something not previously thought possible a flying pig.

The Steamers scored three first half tries, notching up a 22-0 point lead that basically had them home and dry, with very little scoring taking place in the second half. In fact only one penalty was kicked, taking the score to 25-0 with time almost up.

A bonus point try was to follow though, as dynamic winger Ben Smith sparked a length of the field effort that began a meter or two out for their own tryline. Colin Bourke offloaded to replacement hooker Dan Perrin, and thats when the magic happened.

“It was one of those once-in-a-lifetime things that’ll probably never happen again. There was a bit of space there and they kept hanging off me, so I kept on running. I’ve always liked a wee canter,” said Perrin, who coasted up the wing before linking up with his outside backs.

“I seem to remember bumping off a couple of tackles that were pretty weak, whoever they were, and once I got over halfway it did cross my mind that I could go all the way. I was trying to get Savea to come across with me and for Noakesy to cut, and then maybe sell Savea and get to the tryline myself,” he admitted.

“The boys have given me heaps since Sunday. I already had a bit of a bad nickname – Pig – so since then it’s been the Flying Pig or Babe!”

Flyhalf Chris Noakes was with him in support all the way.

“I was howling at him to give me the ball but it seemed like he was never going to pass it and was happy to ignore me. When he initially took off I thought ‘Righto, let’s see how this goes’ and was going to cut inside, but there was a big bloke inside him and I didn’t fancy getting clobbered,” Noakes explained.

“I expected a pass within the first 10m but Pig had other ideas and some pretty big designs on that tryline, although there’s a few questions being asked about why a hooker was lurking out on the wing in the first place. He surprised us all with the wheels he’s got and seemed to get his second wind once he bunted off the fullback, who wasn’t much of a speed bump at all.”

The hooker himself says the distance he covered has been the topic of much debate this week.