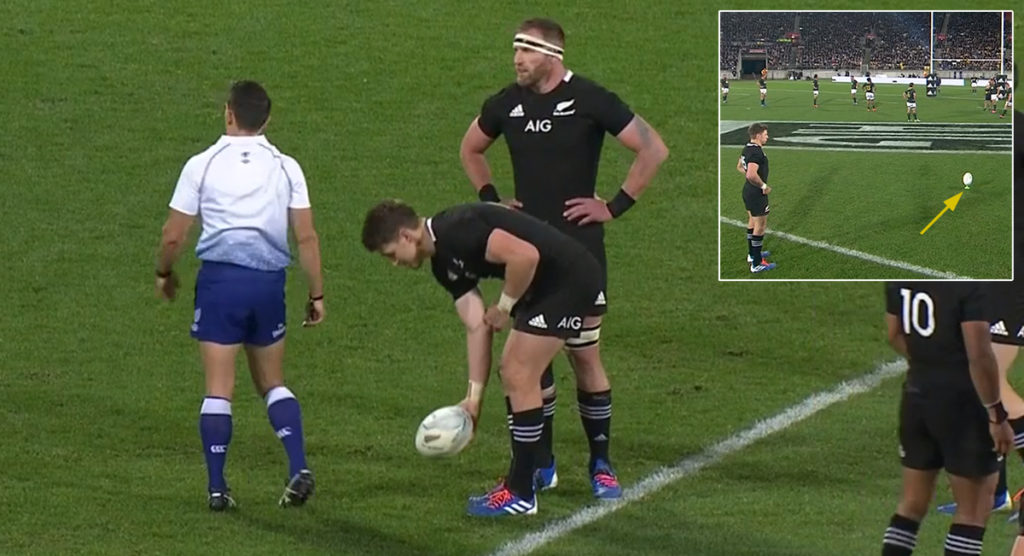 After New Zealand and South Africa’s 16-16 dramatic draw in Wellington on Saturday, there have naturally been a number of talking points as the old rivalry appears to be heating up ahead of the World Cup. One moment in particular has angered South African fans.

After initially dominating the first half, South Africa gave away another penalty early in the second, when Malcolm Marx looked to have won the steal at the breakdown but referee Nic Berry said that there was no clear release.

At 7-6 up, the All Blacks opted to keep the scoreboard ticking along as Beauden Barrett stepped up and Kieran Read had a chat with the referee.

The mark was quite clear to see, but with Read and Berry’s backs turned, Barrett gave the ball a little nudge ahead, closer to the posts.

#SSRugby : Watch closely what Beauden Barrett does with the ball as he prepares for the penalty kick pic.twitter.com/jfSqgr456D

While this is something that most goal kickers would have tried – and executed successfully – at some point in their careers, seeing it done so blatantly like this in a tight Test match has angered South African fans, who haven’t held back with their assessment of it on social media.

It has been compared to ball tampering in cricket, and called ‘blatant cheating’. While others have said it’s simply gamesmanship, and the extra few meters probably wouldn’t have made a huge difference at that distance and angle.

South Africa went on to score a late try and Pollard’s successful conversion gave them a 16-16 draw.

Here’s another look at this particular talking point: