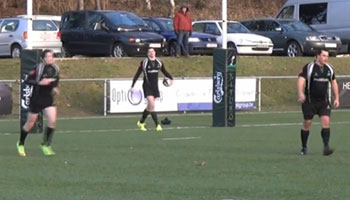 If you’ve ever thought about how many tries could actually be scored in a if one team steps aside and allows the others to do their thing, wonder no more. Royal Kituro in Belgium’s top club rugby league has won a match 356-3. Yes, you read that correctly.

As the BBC reported yesterday, the referee for this match failed to turn up on time, so a lot of the visiting players from Soignies left, including their coach, assuming the match would be cancelled.

The referee did turn up, an hour later, so the match went ahead as the players that stayed there were obligated to play so that they could get 1 league point for a loss, rather than 0 for forfeiting.

The circumstances, which included Sognies playing with just one substitute, didn’t stop Royal Kituro digging the knife in, as they proceeded to run in 56 tries and 38 conversions.

With the tries practically uncontested and scored under the posts, we tend to wonder what happened with those other 18 conversions.

Soignies did get one drop goal, but the match was considered a bit of a non-event by them, as they literally stepped aside for many of the tries, as can be seen below.

The club president described the match as catastrophic, but despite the humiliating loss, they do still sit above Kituro on the league standings, in third place by just one point. Their points difference however now sits at minus 264.

What is the biggest loss you’ve even been on the wrong side of, or inflicted? Let us know below

credit: kipiktv and the BBC