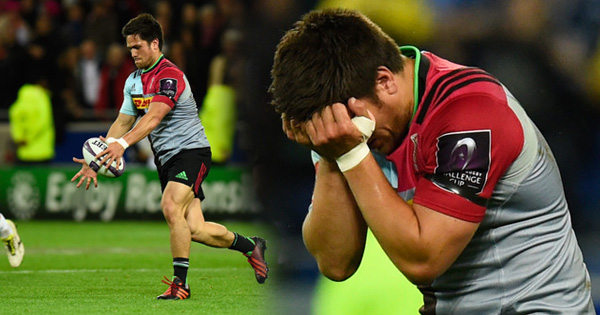 Ben Botica had a nightmare ending to his Harlequins career as Montpellier won the European Challenge Cup Final 26-19 in Lyon on Friday night. Quins had mounted a comeback but with ball in hand and time up, Botica kicked it away, rather than keeping possession to go for the draw.

Harlequins had fought their way back into the match after Jake White’s largerly South African Montpellier looked comfortable for the majority of the contest. Quins needed a try and conversion to take the game into extra time, but after wrestling back possession, it all ended rather suddenly.

Botica, son of former dual code New Zealand international Frano Botica, joins Montpellier next season. In fact as of today, he is now a Montpellier player, part of the new defending champions.

It added another dimension to the bizarre circumstances surrounding the brain explosion that left viewers, fans and teammates absolutely gobsmacked.

Botica soon realised what he’d done, punching the turf and holding his head in his hands before being consoled by teammates, who to be fair, were equally in shock.

Botica’s inexplicable clearance downfield sent twitter into overdrive, with a mix of shocked, angry, amusing and sympathetic tweets. Not too many of the latter, it must be said.

Why did he kick that?! Ben Botica kneels down on the pitch and repeatedly punches the turf

Ben Botica repeatedly punched the ground after that decision. A premonition of what Connor O’Shea is about to do to him…

Wow. Ben Botica’s going to be kicking himself*.

* Towards the opposition for no reason whatsoever

@QuinsRugbyUnion What the f**k was Ben Botica doing? Unbelievable!

I Understand the frustration 4 da @QuinsRugbyUnion fans bt players do make mistakes n the moment. Let’s gt behind the bro @ben_botica much??

Today Botica tweeted his apologies, and a bit of a farewell message to the club.

But as many fans have pointed out, adding to the misery, this isn’t the first time Botica has done this type of thing. In a Premiership match against Northampton Saints he kicked the ball away with time up, giving Saints possession that led to a Ben Foden winning try.

Apparently our try by @ben_foden didn’t teach Botica any lessons!

Montpellier are an incredibly powerful unit who were deserving winners, so to be fair Botica should not be solely to blame for the loss, however fans were understandably dismayed with the way the match ended, just as Harlequins had momentum and a chance at glory.

Congratulations to White and the whole Montpellier squad who are set to be a real force in the years to come, both in Europe and France’s Top 14.