Ben Tameifuna's hits vs the Brumbies in the Super Rugby final 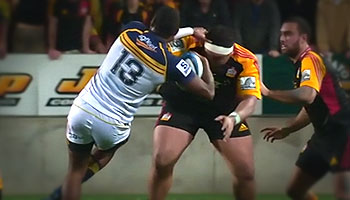 Big Ben Tamiefuna was prominent in the spine-tingling Chiefs Haka after their Super Rugby victory, but during the match he made his mark in a few other ways. The giant prop smashed a few backs, some perhaps illegally, and it was brutal to watch.

Many of you wanted to see the clips again though so here is a short compilation that features three of the standout big impacts he made.

While Tameifuna has been known to put the shoulder in, Australian commentator Rod Kafer for one thought that the hits were okay, specifically the one on Tevita Kuridrani.

“The collisions have been special. Nothing wrong with that hit. He got the arm out at the right moment. No problems at all. Great shot.” said former Brumbie Kafer.

“Kuridrani soaked it up. Big man on… not as big a man. And whack, didn’t he feel it! Tevita Kuridrani will put that one in his scrapbook.”

Poor old George Smith and Henry Speight also felt the full weight of the young tighthead, sometimes without the ball, but it’s great to see the big guy getting around the park and making his precence felt. Look out for more of the same as he features in the ITM Cup this season.

View more of Big Ben in action in the Related Posts below, and if you like big hits in general, have a browse through our Big Hits category