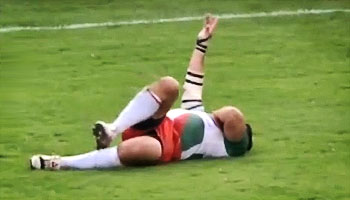 In a week from now round 5 of the Heineken Cup resumes across Europe so today, and hopefully over the next week, we’ll aim to post a few requested clips from previous rounds. Here’s one that outraged Saracens fans, for more than one reason.

In round 2 of the competition Biarritz beat Saracens 15-10 in a match that was tight and lowscoring but produced two fantastic tries nevertheless.

Late in the game Saracens came close to putting themselves in a winning position as they almost scored in the corner through James Short, but he was held up and the try didn’t stand.

Unfortunately for Saracens Short’s frustration showed as he lashed out at hooker Benoit August, striking him in what appeared to be the throat. A dramatic flop to the floor followed, and the possesion – which was going to go the way of the visitors – was reversed with a penalty for Biarritz.

It looked for all money to be some serious acting, but only August himself will know if he was genuinly injured or not. The whole scene was quite amusing though as players could be seen sniggering as he fell over, and then when referee Nigel Owens made the call to penalise Short.

The lesson though, despite the possible overacting, is that he shouldn’t have given the opposition the opportunity to milk a penalty in such circumstances, however farcical it may have appeared.

Do you think that in future players that act in such a way should possibly be cited?