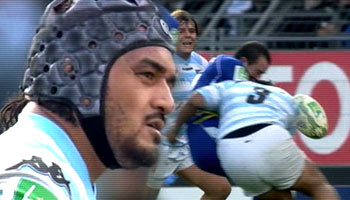 It was an all French affair in Pool two of the Heineken Cup on Saturday as Racing Metro picked up their first win of the campaign by beating Clermont Auvergne 16-9. The only try of the match went to Sireli Bobo, but the clip featured here comes from another Pacific Islander.

We all know the penchant for big hits that stems from that part of the world, and while there have been unfortunately a few that have been misdirected of late, there was nothing wrong with this punishing hit from Racing Metro prop Mikaele Tuugahala.

Benoit Baby was the unlucky recipient as he picked the wrong guy to run into. The fullback was brought to a halt instantly by the veteran from Wallis and Futuna, who is actually the cousin of Toulons Jocelino Suta .

Possibly the most impressive thing is that despite running into and being smashed by a far bigger man, Baby got up after a few minutes and continued on.

It’s actually not the first time we’ve seen Baby hit hard, as two years ago (to the day!) we posted a clip of him being nailed by Jean-Philippe Viard of Montauban.

Morgan Parra picked up a late penalty for Clermont which gave them a valuable losing bonus point as the result means that both sides are now sitting with one from two so far.