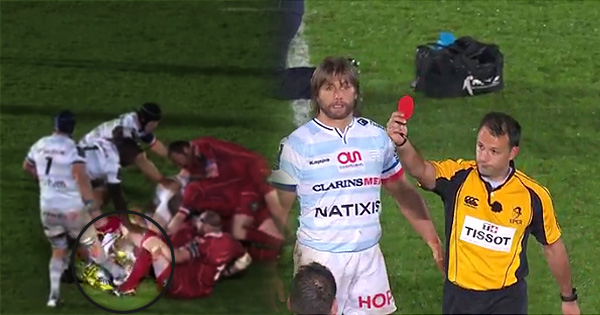 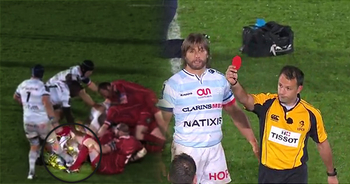 Racing 92 flanker Bernard Le Roux was shown a straight red card for a stamp on Scarlets prop Phil John at the weekend. Today he faces a disciplinary hearing, along with Matthew Rees, who was cited for the same offence, although both incidents are decidedly different.

Racing won the match 29-12, despite going down to 14 men early in the second half.

They had already secured a four try bonus point so it didn’t affect things too much, but the decision to show the France flanker a straight red card was met with some consternation by fans.

Le Roux lashed out due to being held and tripped, and while it was clearly deliberate, the contact wouldn’t have caused too much harm, leading some to believe that a red card was harsh.

Referee Greg Garner conferred with his TMO though and the South African born flanker saw red.

He faces a disciplinary hearing in London after being charged with a contravention of Law 10.4(b) Stamping/Trampling on an Opponent, the same offence that Matthew Rees committed last week.

While both incidents are completely different, there is still a good chance that Le Roux will spend time on the sidelines, as the World Rugby santions for Foul Play for Stamping/Trampling carry the following entry points: Low End: 2 weeks; Mid-Range: 5 weeks; Top End: 9 to 52 weeks.

UPDATE: Bernard Le Roux has been suspended for one week.

“In upholding the red card decision, the Judicial Officer found that Le Roux had stamped on Phil John and determined that the offence was at the low end of World Rugby’s sanctions and selected two weeks as the appropriate entry point,” the statement read.

“He then reduced the sanction by the maximum of 50 per cent taking into account Le Roux’s guilty plea, expression of remorse and clean disciplinary record, before imposing a suspension of one week.”