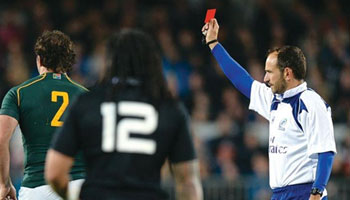 Following the controversial sending off of Bismarck Du Plessis in Auckland, the IRB stated that ref Romain Poite was incorrect with his first half decision to sinbin the Springbok. Still, some fans and media insist that Du Plessis was in an offside position.

In this clip taken from New Zealand rugby chat show Reunion, we can see a wider angle of the sequence just before the big tackle happened. This angle wasn’t shown during the match, nor was in included as part of any highlights clips at the time.

Hopefully everyone will now be on the same page and realise that it was simply an unfortunate refereeing decision, and sensationalist articles referring to ‘Thugby’ can now be put to bed.

The Bok hooker has said that the ramifications of what happened have surprised him.

“The reaction of world rugby has been extensive and with so much emotions being part of the game and part of being a rugby spectator it is understandable,” he told the Star in South Africa.

“It needs to be mentioned though that I am in no position to criticise anyone. I have no doubt that Mr Poite had no ill intentions towards the Springboks or me.

“It must have been a great occasion for him to have been awarded a Test match viewed as arguably the greatest clash in world rugby.

“The commentary in the media must have an immense impact on him. I feel sorry for him and I do not want him to be banished from the rugby fraternity or to be viewed as a ‘villain’. I bear no grudges against him and I have no doubt that he tried his best out there on the field.

“I have no hard feelings and bear no grudges,” Du Plessis added.

In this video you can see the tackle from that wider angle that is mentioned above, as well as hear the opinions of the Kiwi panel, who all agreed it was an unfortunate situation