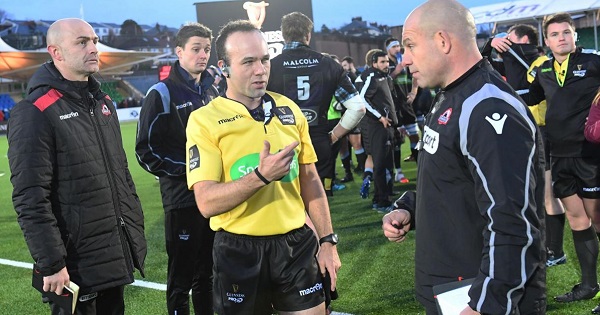 Glasgow Warriors bounced back from their opening leg 1872 Cup defeat to Edinburgh with a commanding 17-0 victory over their Scottish rivals at Scotstoun, but only after the stadium’s fire alarm caused a rather puzzling postponement.

Two minutes before the break, the alarm sounded in the Main Stand, prompting referee Mike Adamson to call a premature halt to the opening half, with Glasgow leading the game 3-0.

The capacity 7,000 spectators and all media and staff were forced to evacuate the ground as the fire services were called. Both sets of players and officials congregated in the middle of the pitch.

Extraordinary scenes as crowd are led onto pitch at Scotstoun with 1872 Cup match suspended just before half-time due to a stadium evacuation pic.twitter.com/NbFla86zZx

It was ultimately a false alarm and play resumed nearly half an hour later.

For a brief moment, it was thought that a security threat was the reason for the alarm, but after the fire brigade scrupulously checked the stadium and its surroundings, they concluded that a false alarm had caused the disruption.

The match ultimately failed to live up to expectations after a dramatic first leg, with neither side really asserting their dominance on the other. Edinburgh were made to pay for its indiscipline as three Finn Russell penalties and a last-minute try from Lee Jones completed the whitewash.