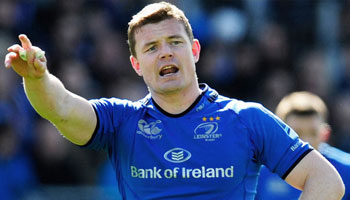 Ireland and Leinster legend Brian O’Driscoll has today announced that he has extended his IRFU contract for another year, which covers both club and country. Against Biarritz recently the fans requested it, and today, they got what they wanted.

The 34-year-old veteran was recently included in the British & Irish Lions squad for the tour of Australia, what will be his fourth Lions tour after first touring Australia as a youngster in 2001.

With his form and fitness, Warren Gatland has put faith in the ability, experience, and leadership value that he will bring to the squad. It’s also no doubt a good confidence boost, fully vindicating his decision to continue on for yet another year.

He admitted that it wasn’t an easy decision to make, but thanked the fans for all of their support.

“I want to thank the IRFU and Leinster for allowing me the time to think about my future and discuss my options with my family,” O’Driscoll said.

“The support my family and the Irish and Leinster fans have shown me over the past few months, and indeed years, has been phenomenal and I am now very much looking forward to one more year playing with Ireland and Leinster.”

New Ireland coach Joe Schmidt, who has of course spent so much time with O’Driscoll at Leinster, said he was delighted to have the opportunity to work with the great centre for another year.

“It’s great that Brian has agreed to continue playing. He’s an inspirational player, not only on the pitch, but also on the training ground,” he said.

“He’s played well again this season and other players continue to learn from him. I know that every squad of which he is a part will profit from his qualities both as a rugby player and a person.”

This weekend O’Driscoll will be looking to help Leinster to an Amlin Challenge Cup title when they face Stade Francais in Dublin. That, and the RaboDirect PRO12 final a week later (if he plays) were expected to be his final games at home, but fans can look forward to another year of BOD magic.

Against Biarritz in the Challenge Cup semifinal he scored a try after a nice break by Sean Cronin, and was then cheered on by the crowd, who spurred on by his acknowledgement, continued their chorus of ‘One more year’. Now they will get to enjoy precisely that.