Brian O'Driscoll dumped off the ball by Mauro Bergamasco 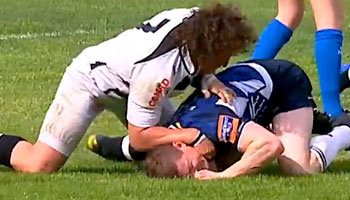 Leinster are waiting to hear if Zebre’s Mauro Bergamasco will be cited following an off the ball tackle on Brian O’Driscoll during the RaboDirect PRO12 match at the weekend. So near to the Lions tour, fans will be pleased to note that he wasn’t injured.

There have been vocal calls for a citing though, as the Leinster star was tackled not only without the ball, but lifted and dumped down in a way that could have caused some damage.

It appeared as though Bergamasco thought he had read an inside switch, but you can see he was looking at O’Driscoll – who didn’t have the ball – and went through with the heavy tackle anyway.

It went unnoticed and unpunished at the time, despite the centre being clearly incensed. A shoulder injury ahead of the Lions tour, especially in this manner, would have been cruel irony.

The PRO12 Independant Citing Commisioner has 50 hours from the start of the match to make a decision on whether Bergamasco should be cited. That runs to 4:30pm today.

Coach Joe Schmidt was relieved to leave Italy without any injuries, after Isa Nacewa was also on the receiving end of a questionable tackle. He wasn’t overly concerned at the time though.

“I think there were a couple of things that might get looked at. They were both happy to continue,” said Schmidt. “Drico hasn’t played a lot in the last 10 weeks and Isa didn’t play over the Six Nations at all. They were pretty keen to get game time under their belts. So, we left them on.”

Leinster won the game 41-22, with O’Driscoll setting up a try and playing well throughout.

Do you think Bergamasco should be cited for this, or was he just overzealous?