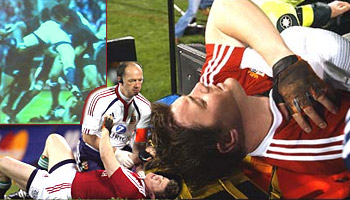 In 2005 the British and Irish Lions Rugby union team toured New Zealand for the first time since 1993, suffering a 3-0 whitewash at the hands of the New Zealand All Blacks.

For the Lions, having toured Australia in 2001 and South Africa in 1997, it was the first time for 22 years they lost every test match on tour.

The squad wasn’t helped, of course, by losing their world-class captain less than a minute into the first Test match. It was highly controversial at the time, with accusations being fired back and forth. The guilty party were Tana Umaga & Kevin Mealamu.

Umaga being involved particularly shocked people seeing as he was known to be one of the better behaved players in the game.

The issue resurfaced violently, after someone taping the game from the stands anonymously submitted controversial footage that the stadium’s cameras didn’t pick up.