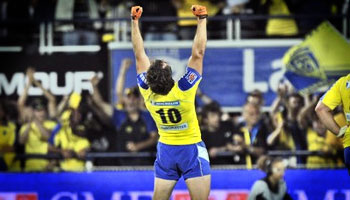 Clermont progressed to the Top 14 semi finals after coming back from being 14 points down, to beat Biarritz 27-17. This quick piece of thinking by Brock James contributed to the effort.

Defending champions Clermont will face Toulouse in the semi final in Marseille in two week’s time. They were 17-6 down following two Biarritz tries, but rallied well in the second half, and were helped by a yellow card for Iain Balshaw.

In fact it took literally seconds for Clermont to take advantage of the dismissal, as Balshaw had barely left the field before flyhalf Brock James caught the Biarritz side napping, coasting in for a sneaky, yet well taken try.

There was more controversy though, with Alexandre Lapandry’s try allegedly being prevented from touching down, but the TMO made the decision, and the rest is history.