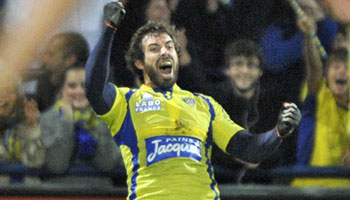 Brock James slotted a dramatic last minute drop goal to snatch a 28-25 Top 14 win over Stade Francais at the Stade Marcel Michelin on Friday night. The home side, Clermont Auvergne, had to come from behind and overcome a 12-point deficit.

Clermont have shown again that they are incredibly difficult to beat at home, despite Stade Francais coming heartbreakingly close this time. They have won their last 47 matches at fortress Marcel Michelin, which includes games played in the Heineken Cup.

It looked as though this may have been a night for the Parisians however, as they scored some great tries and built up a nice lead, mainly due to the influence of Fijian wing sensation Waisea Vuidravuwalu, who scored two tries and contributed to another, finished by Paul Warwick.

A Thomas Domingo try pulled things back a bit, and Morgan Parra – who finished with 17 points – worked away at the lead with the boot, as did flyhalf replacement James, who slotted a dropgoal.

James, who was on for David Skrela, then stole the show with his well taken second dropgoal, extending Clermont’s incredible home winning record, which goes all the way back to 2009.

Dejected Stade Francais captain Pascal Pape summed things up after the game: “We lost it right at the end. But Brock James is Brock James, and he killed us in the second half.”