Calum Clark banned for 32 weeks for breaking another player's arm 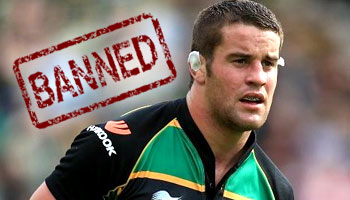 Last night the ruling in the Calum Clark hearing made, with the Northampton Saints loose forward being suspended from the game for 32 weeks. He will only play again in November. Below is a short report with a reverse angle of the incident.

The 22 year old flanker was cited for his seemingly unprovoked attack on Leicester Tigers’ Rob Hawkins, which left the hooker with a broken arm after his elbow was hyperextended.

Hawkins had surgery earlier this week and will be out of rugby for the rest of the season. At one stage it appeared as though he might have been out of a contract as he was playing for a renewal, but Tigers director of rugby Richard Cockerill has stepped out and said that they’ll take care of him.

Clark pleaded guilty to hyperextending Hawkins’ right arm, and to committing ‘an act contrary to good sportsmanship’. As expected, he received a fairly heavy ban, although it appears that in many circles the opinion is that a heftier punishment wouldn’t have gone amiss.

He will be out of rugby until 1 November though, and will also have to pay hearing costs of £500. He has the right to appeal and Northampton Saints are backing their player, reportedly saying they are disappointed with the severity of the ruling.

“The disciplinary panel found that Calum Clark had not intended to injure Rob Hawkins in the course of moving his arm. Accordingly, the unfortunate injury suffered by Rob Hawkins was unintentional.

“In the light of that finding of the disciplinary panel, Northampton Saints is bound to express concern and disappointment at the imposition of such a long suspension, even after significant mitigation in recognition in what was accepted to be Calum Clark’s genuine remorse,” they said.

The RFU have published a full report from the hearing, which you can view here.

The incident was featured when he was first cited so you can watch the full clip here, but below is a quick news report from this morning, which features a reverse angle of what happened.

The All Blacks star set to shine again against Los Pumas

The All Blacks head into their second clash against Los Pumas looking to do the double over Argentina in successive weeks, and one player could prove to be crucial in achieving that goal.

Moana Pasifika have revealed they have only eight spots left on their roster for their inaugural campaign in next year's Super Rugby Pacific.

Former Wallabies great Adam Ashley-Cooper has called time on his 16-year professional playing career to move into the realm of coaching.

The Wallabies' mid-week billiards battles have become a competitive outlet to cope with their sudden glut of Rugby Championship options.