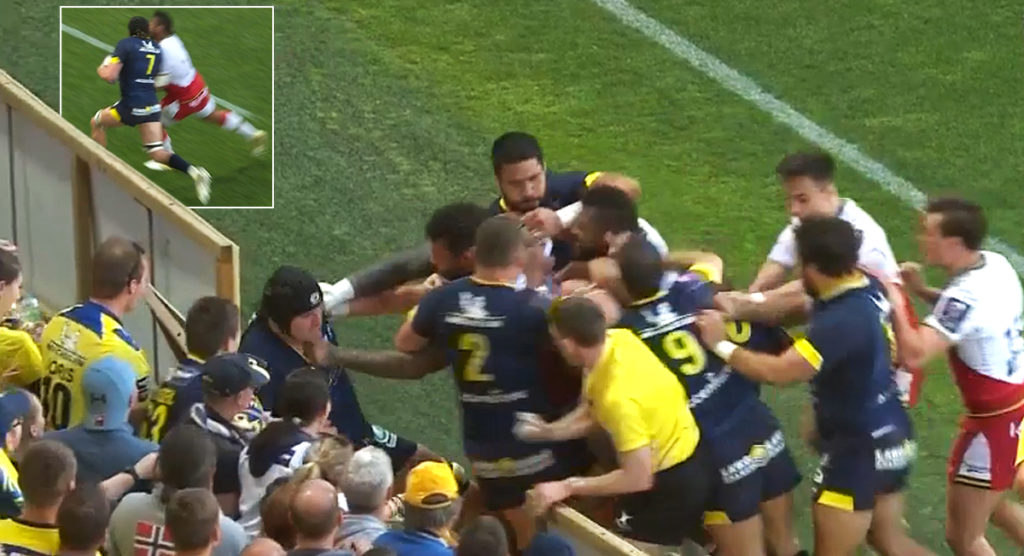 Clermont Auvergne booked their spot in the European Challenge Cup semi-finals after beating Northampton 60-31 at the Stade Marcel Michelin. Much of the damage to the visitors was self-inflicted, with Taqele Naiyaravoro copping a needless yellow card in the first half.

Damien Penaud and Peter Betham both bagged hat-tricks for the home side while the Saints launched a stunning second-half fight-back.

On 27 minutes, former Waratahs and Glasgow Warriors player Naiyaravoro was sin-binned for a no-arms tackle on Clermont back-rower Arthur Iturria, who was set to score following a barnstorming run from Alivereti Raka. Worse was to come though as Clermont were awarded a penalty try in a match already going against the Saints.

Naiyaravoro scrambled back in defence and ironically had plenty of time to make a legitimate tackle on Iturria. But for whatever reason, the Australian opting to plant his shoulder firmly into the mid-riff of the flanker, causing an unnecessary brawl as a result.

Referee George Clancy had a lot to get through between himself, assistant referee Joy Neville and TMO Brian McNiece. Naiyaravoro was deemed to have illegally tackled Iturria without the use of his arms and in a position where Iturria was likely to score.

It was a clumsy incident from Naiyaravoro, who could have easily made the tackle and prevented the try legally. That said, Northampton did not concede any more points until Naiyaravoro’s return, limiting the damage to a degree.

WATCH: Giant Taqele Naiyaravoro swats opposite man away like a schoolyard bully

Saints then stirred themselves into a heroic comeback and got to within six points of Clermont after tries from Ahsee Tuala, Luther Burrell, Alex Mitchell and Rory Hutchinson. Clermont seemed to be all at sea in defence but regathered momentum with Penaud’s second and third respectively before Betham completed his own triple four minutes from time.

13 tries in total were split between the two sides in arguably the pick of the Challenge Cup quarter finals.

Clermont return to the Marcel Michelin to face Harlequins, while La Rochelle host Sale in the semi-finals.