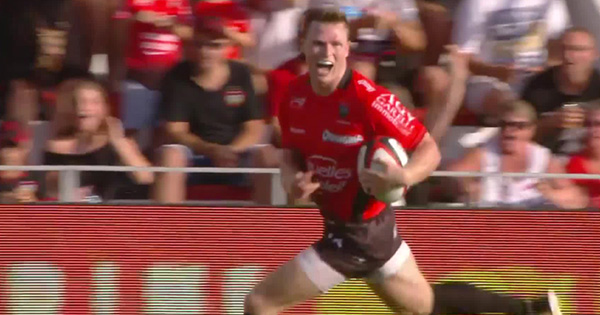 Chris Ashton wasted no time in finding his stride for new club Toulon. The former Saracens and England winger had quite the debut, scoring two tries and making a try saving tackle in his club’s dismantling of Top 14 rival Pau 41-14.

The prolific winger has been a devisive figure among fans of the game and is certainly not without his controversial moments. However, once again, Toulon appear to have pulled the right strings as he had a significant impact on the match.

His first try came off an intercept in the 61st minute. He picked off Colin Slade and out-paced all his chasers to dot down behind the post. The next score came only a few minutes later when he skinned Frank Halai to the corner.

Ashton also showed some pace on the defensive side by tracking down scrum-half Thibault Daubagna for a fantastic try-saving tackle (see below).

For the time being at least, Ashton seems to be relishing his new oportunity to play abroad after calling a suspension on his international career.

Some would certainly argue that moments of ill-discipline and suspension could be seen as a main contributing factor that places his career solely in someone else’s hands, i.e. Eddie Jones.

For the moment though, it appears he’s playing at a high level again and is starting off on the right foot.