Chris Ashton's brilliant try against the Wallabies at Twickenham 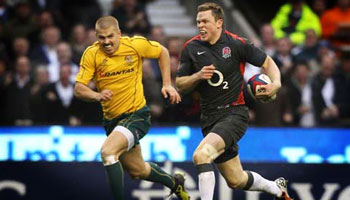 Those of you who have visited this site over the years will know that the aim has never been to be a highlights channel, but rather an archive of all things great in world rugby. It’s with that in mind that we’re adding this Chris Ashton wonder try to the archive as a featured post.

Ashton scored two tries as England turned on the heat against the Wallabies last weekend. His first came from some fantastic build up play. The second was that of pure adrenalin and raw speed as Ashton ran 95 metres to score one of the greatest tries ever seen at Twickenham.

The former League player made the switch to Union three years ago after being inspired by Jason Robinson. Robinson himself was watching on Saturday and has said that he did something he hasn’t done in the past – leapt to his feet and cheered Ashton all the way to the tryline.

“He’s come into a new game and he’s learning new things but his league upbringing is helping him like it helped me. I see a lot of league in him in that there are no restrictions in how he plays. He attacks, he takes people on. You’ve got to be able to take people on when they don’t expect it,” he added.

Those involved, Ben Youngs, Courtney Lawes, and Ashton himself, described the moment through their eyes. “Sometimes in rugby your instincts just take over. I saw the gap and just went for it,” said Youngs, who passed to second rower Lawes after his dummy on the tryline.

“I just tried to draw the man. I was going to pass the ball earlier bout thought, ‘Whats the point?’. I managed to draw him in, give the pass to Ashy and it worked out all right,” said Lawes.

“I think he thought he was Sonny Bill Williams, sucking in two players and offloading,” added Youngs. Ashton said that he was pretty knackered by the end of the run, but with such adrenalin in front of a home crowd, he could have kept running all the way up the stands.

“I just got the ball in a bit of space and ran like always. When I made the break out of the 22, I looked up at the big screen and it gave me an idea where I was and where Mitchell was,” explained Ashton.

“There was no-one on his inside so I thought I would go that way for the corner, as as I went past him he seemed to drop off, so I went under the posts. I didn’t really change speed, I just kept on going.

“I’ll have to sit down with a beer and reflect on it,” he added.