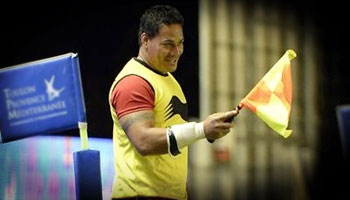 Toulon’s Chris Masoe found himself in an unfamiliar role in the final ten minutes against Racing Metro in their preseason friendly after the touchjudge took a bad knock as Toulon almost went over for a try in the corner.

Former Castres stalwart Masoe, who has had a long and fruitful career, no doubt relished the opportunity to try something new, even if it was under strange circumstances.

As Toulon put together a sweeping attacking move that would have extended their lead, replacement back Vincent Martin nearly went over in the corner if it were not for an incredible covering tackle by Bernard Le Roux.

Unfortuntaely the force of Le Roux’s tackle knocked Martin into touch, and into hapless touchjudge Herve Gilard’s knee, which bent backwards awkwardly, and that was the end of his game.

With no replacements to be seen and only a few minutes left in the match, 34-year-old Masoe stepped up, stuck on the yellow shirt, and dutifully performed the required role.

We saw him in action in the football vs rugby game against Olympique Marseille recently, playing goal keeper at one stage, so it’s been an interesting few weeks for the former All Black.

Toulon won 14-6 and Masoe didn’t have too much involvement after that, sticking the flag up once for a Racing Metro lineout. It’s good to see the amateur spirit of rugby is alive and well.