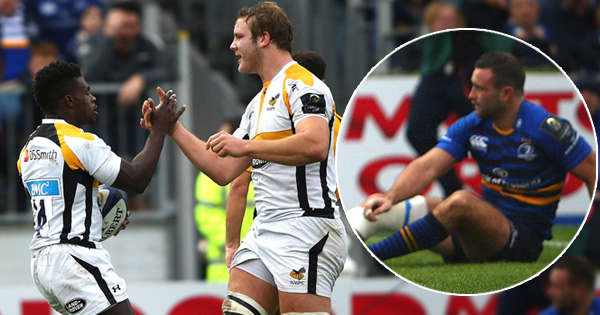 Wasps blew away a flat looking Leinster in Dublin on Sunday, as the European Champions Cup got underway. The 33-6 victory was kicked off by Christian Wade’s poacher try, after Dave Kearney made an awful mess of a fairly innocuous looking box kick by scrumhalf Joe Simpson.

Wasps went into the break with a ten point lead following the converted try, as the unpredictable bounce of the rugby ball cruely bamboozled Kearney for Wade to pounce.

While Kearney made an awful mess of it, he’s certainly not the first to be done by the bounce of the rugby ball. Could he have done better? It looks as though he wasn’t close enough to get it on the full, so apart from maybe being a bit casual, perhaps it was just one of those things that can be put down to really bad luck? The look on his face said it all.

A reminder that all France based games were postponed due to the awful events in Paris.