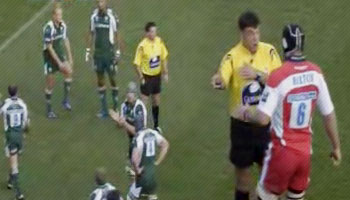 As the Northern hemisphere rugby scene welcomes back many players that were away on World Cup duty, we look at a classic moment brought to us by not a star player, but by a referee for a change.

The game was between London Irish & Gloucester recently, and as referee Sean Davey spots a repeated infringement, you can see the opposition players around him clapping their hands expecting the inevitable. He calls across the guilty party to give him what we expect to be his marching orders. What he does is absolutely classic.

For pulling it off perfectly and doing something that has probably never been done by a ref anywhere before at this level of sport we say well done, Sir.