Classic Encounters - The Blues vs Chiefs thriller in North Harbour 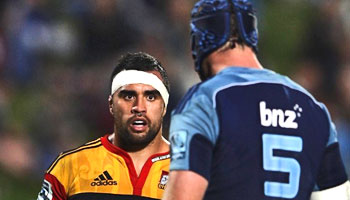 The Chiefs and the Blues, on opposite ends of the Super Rugby table, produced a thriller on the weekend, one of the best games of the year. It went back at forth throughout, but ended 41-34 to the visitors after their speedy winger scored his fourth try.

Chiefs flyer Asaeli Tikoirotuma stole the show with a hat-trick, and one extra for good measure. He equalled the individual try-scoring record for a Super Rugby match.

The Blues’ dynamic Rene Ranger was unlucky to be on the losing side after he scored one of the individual tries of the season, and helped create another. While he’s not a regular All Black, he does things on the rugby field that very few others can.

The game was tied at 20-20 at halftime and the same pattern continued in the second period, but the late try by Tikoirotuma sealed it, bringing a relieved smile to captain Liam Messam’s face.

“We are definitely happy with the five points. They were hard earned. It was a tough game and full credit to the Blues they really took it to us,” he said.

There were a number of tries that could have been featured here on their own, with two of Tikoirotuma’s in particular being of the highest standard, and Rangers effort worthy of it’s own post too. For now though we’ll get these highlights up so you can see all the action for yourself.

The Blues picked up two points, but the Chiefs remain top of the table at the mid-season break.