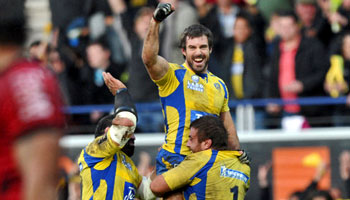 Much of the focus this week has been on the Autumn Internationals but there was a full round of Top 14 action taking place, and this game was just another classic in a highly entertaining league.

It started with a bang as straight from the kick off Clermont almost scored what would have been one of the tries of the season, as former All Black wing Sitiveni Sivivatu broke down field before getting a return ball that was snuffed out.

In the end the game came down to two well taken kicks. The first of which tied things up as Wilkinson, who scored all of Toulon’s points, did what he does best to salvage the draw.

It wasn’t enough though and former Wallaby Matt Giteau made an error in judgement, and was perhaps harsly penalised as he got a bad bounce while going for a loose ball, which he then knocked into touch. it was deemed to be deliberate and it handed Clermont a kick for the win.

Brock James stepped up and did the rest, providing the home side with an unbelievable 50th consecutive win at their home fortress, the Stade Marcel Michelin.

The win brings Clermont to within two points of Toulon at the top of the Top 14 table.