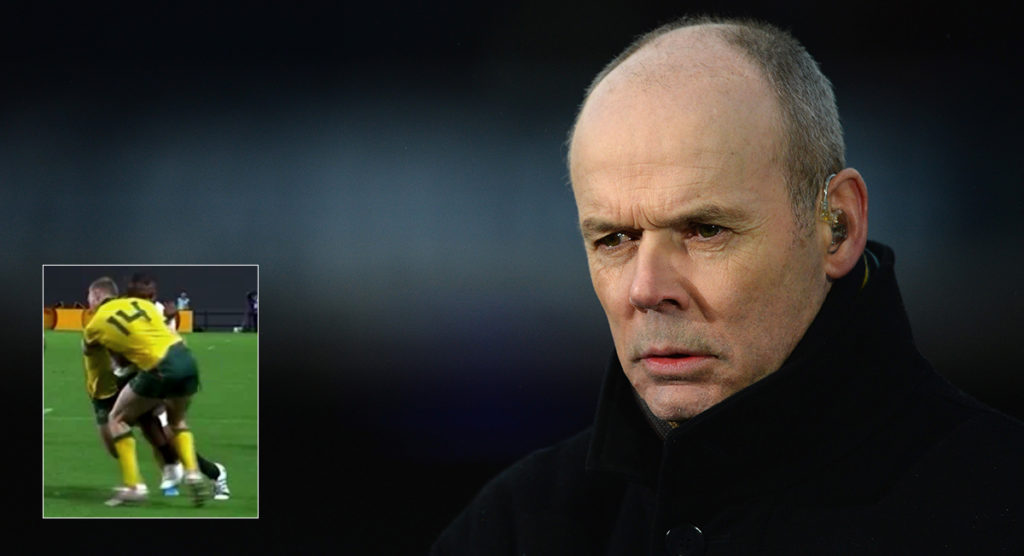 The utility back was handed the ban on Wednesday following a tackle on Fijian flanker Peceli Yato on Saturday which was deemed dangerous and forced the player off the field with concussion. Hodge was initially banned for six weeks, but it was reduced based on his character and disciplinary record.

By and large the rugby world is in agreement with this decision, and many feel it was a red card in the game. Hodge made contact with Yato’s head with his shoulder, and as World Rugby have clamped down on high and dangerous tackles, many of these tackles have been adjudged to be red cards before.

While the likes of former Wallabies Tim Horan and Drew Mitchell have voiced their disapproval at this decision, Woodward has now joined them. He said that it is a “totally wrong decision” on Twitter, and said: “Has any of those making this decision ever tried stopping someone as powerful as Yato by wrapping their arms around him ?- good luck if you try that!”

Totally wrong decision, will have huge implications for the tournament- for me this is a yellow card and no more @ITVRugby . Has any of those making this decision ever tried stopping someone as powerful as Yato by wrapping their arms around him ?- good luck if you try that ! https://t.co/GdI3rXO0Zr

Some fans were quick to point out that he did try and wrap his arms around, but still made contact with the Clermont Auvergne flanker’s head. But Woodward insisted that it “happens so quickly players cannot possibly react to every situation.” This is effectively what others have said so far, that Yato led with his head in order to bounce Hodge, and the Melbourne Rebels star was caught off-guard.

Seeing as this was only the second game of the RWC, it may be a sign that there are many more bans to come, particularly as there are more hearings scheduled. This is perhaps why the likes of Mitchell and Woodward have raised their concerns at this decision, as this RWC could ultimately be defined by suspensions.

But as World Rugby try and make the game safer, any contact with the head will put any tackler in trouble, and that is why so many agree with the decision.

Lots of feedback – still think this is a yellow card – happens so quickly players cannot possibly react to every situation- bottom line was is he trying to hurt the player or basically stop the player without hurting himself – this is happening so fast and just not a red card ! https://t.co/gPMFDE4yJY