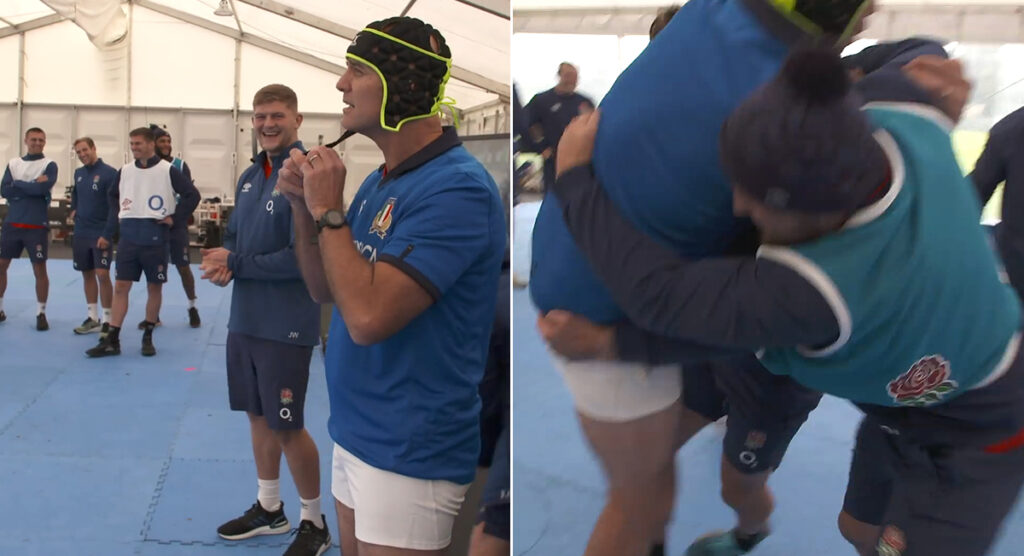 England defence coach John Mitchell will continue dressing up as the opposition as Georgia enter the sights of Eddie Jones’ Six Nations champions.

As part of an indoor training session held during the build-up to the title-clinching win in Rome 10 days ago, behind-the-scenes footage (below) shows Mitchell putting on an Italy jersey and scrum cap before charging towards a group of his forwards.

The former New Zealand boss was smashed backwards to the sounds of laughter from the watching players but while comical, the moment also conveyed a crucial idea.

“The thing these days is to get a message across and you can do it in so many different ways,” Mitchell said ahead of Saturday’s Autumn Nations Cup opener against Georgia.

“It’s important to create a bit of theatre around the message and to give yourself a chance as a coaching group for it to land and create a bit of fun around the message. It’s about putting it in context. Prior to me dressing up, there were questions around how Italy carried and what sort of running lines do they run, etc. And obviously there was the funny bit at the end.

“These days you are very conscious of presenting to this generation in many different mediums – that just happens to be one medium that you can use.”

Among the players to drive Mitchell backwards and on to the floor was Bath tighthead prop Will Stuart.

“It was a nice little touch – I was actually in that defensive line and didn’t realise that the two people outside me were going to smoke him too, which was the best part about it!” Stuart said.

“It was good commitment. It’s the first time here that I have experienced that. You do it at club level a bit, someone will wear a scrum cap and be the opposition’s talisman.”

Mitchell’s innovation came in the week Jones floated the idea of operating with nine forwards against Georgia, whose greatest strength lies in a snarling pack that came to blows with England during a training session in Oxford in February last year.

The warring packs had to be separated by coaching and backroom staff, but the Eastern Europeans had already done enough to leave a lasting impression.

Rather than fielding flanker Ben Earl in the backs – he is viewed by Jones as having the skills to play centre – it is wing Ollie Thorley who is being trialled as a reinforcement up front.

“Ollie has been jumping around there in the line-outs with a smile seeking information,” Mitchell said. “What’s also great about Ollie is that he is very coachable and the guys are helping him out as well.

“The set-piece would be the biggest challenge for the back, not so much the scrum but probably the line-out. Then the attention to ruck attack and ruck defence is more common.

“We have already seen people swap in and out in matches and we have had some six-two splits where a back-rower is selected based on the ability to either use him in the forwards or the backs. In terms of starting selection, I am sure that time will come.”