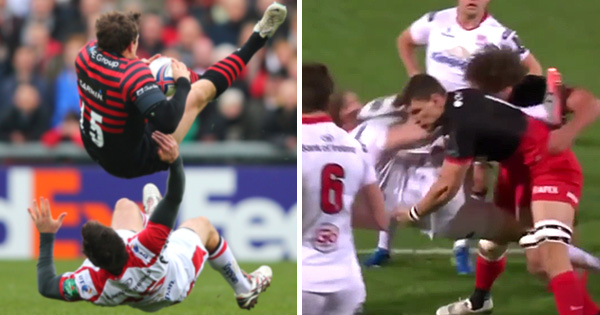 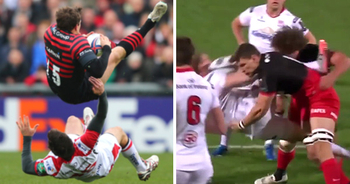 Two very similar incidents occurred during the Europeans Champions Cup over the last two seasons between Saracens and Ulster, but both had different outcomes. After a number of requests to look at both, here’s a quick comparison.

Ulster’s Jared Payne received a red card for a nasty collision with Alex Goode when the Sarries fullback was collecting a high ball in last season’s encounter.

Both Payne and captain Johann Muller argued that the New Zealand-born back’s eyes were on the ball the whole time, but referee Jerome Garces was unmoved.

Payne received a further two week ban, and was just the latest in a long line of decisions by World Rugby when they were cracking down on challenging in the air, including this by Stuart Hogg on Dan Biggar.

During Ulster’s 27-9 loss to Saracens in November, Andrew Trimble was the recipient of a tackle in the air by Michael Rhodes. While it doesn’t look as bad as the Payne/Goode incident, Trimble’s back still smashes into the ground and commentator Austin Healey immediately calls for a red card.

What makes it look worse is the fact that Trimble keeps his leg airborne and his momentum coming down means that he collides quickly with Rhodes.

Referee Romain Poite and the TMO both agree that the tackle was worthy of a yellow card and for once, the slow-motion replay works in favour of the tackler as the challenge doesn’t look too bad.

Do you agree with the outcomes of both tackles?

You can view both incidents below, Payne first then the more recent Rhodes challenge